Return to writings or continue reading

Against the Jews: A Brief overview of Anti-Semitism and Why It Really Matters to the Church Today

Jesus Out of the Box

What We Believe and Why

Fear of the Other

Teaching Healing Prayer for the Victims of Sin

The Country Parson's Advice to His Parishioners

Is Moses the Author of the Torah?

The Way of Jesus - Halakha

The Mathematical Equations of Symbiotic Investment: Maximizing Total Wealth by Investing in Each Other

Shall a Woman Keep Silent? Pt 1

Shall a Woman Keep Silent? Pt 2

Theological Discussion on Women in the Church 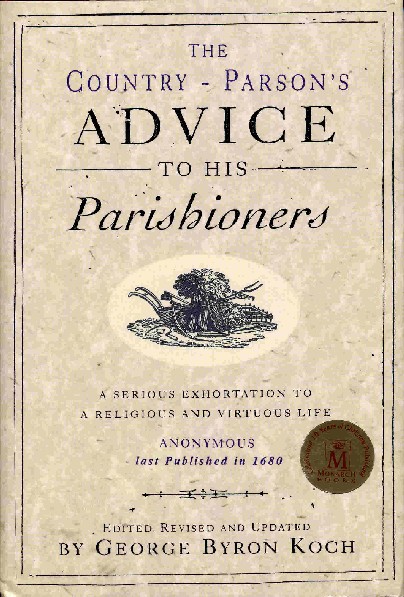 The Country Parson's Advice to His Parishioners

This classic guide, effectively lost for several centuries, was used by John and Charles Wesley for individuals seeking personal holiness, in small group study, and in the deepening of Christian life for English evangelicals at the Holy Club of Oxford.

In 1680, in the reign of Charles II, an anonymous book was published in England. It was probably written by someone familiar with the religious societies then springing up around the country. It became widely accepted, to the point that when the young George Whitefield came seeking Charles Wesley's advice, he was invited to breakfast and afterwards sent away bearing a copy. The Wesleys, and other members of the Holy Club, used the book to encourage the formation of further "societies," especially in London, where young men met to "edify one another" in their Christian faith. One of these societies would lead directly to the foundation of the SPCK.

The book consists of two parts: 'An Argument for Living a Holy Life'; and 'General Directions on How to Live a Holy and Christian Life.' With considerable directness and force, the author urges his readers to consider our status as creatures of the Most High; our calling as Christians; the judgement to come; the torments of the wicked; and the rewards of those who dwell in Christ.

These foundations laid, the greater part of the book is taken up with directions for Christian living: making a solemn resolution; denying self; giving yourself up to God; growing in knowledge of God; living in God's sight; finding spiritual guidance and leadership.

The effect of this shrewd, compassionate, unflinching book is to put iron into the soul. Carefully revised and updated to retain its essential character, it is fully accessible to modern readers.

Praise for "The Country Parson's Advice to His Parishioners"

‘The great evangelist George Whitefield put on record 250 years ago that, in his quest for new birth in Christ, the Country Parson’s searching account of real personal godliness 'was wonderfully blessed to my soul.'  Those who read the book today will surely find themselves echoing Whitefield’s words.’ —The Rev. Dr J.I.Packer

‘This splendid guide to personal holiness … Every person who is actively involved in making disciples of the Lord Jesus Christ will want to read The Country Parson’s Advice to his Parishioners.  Our generation is in Koch’s debt.’ —Lyle W. Dorsett, Professor of Educational Ministries and Evangelism, Wheaton College, Illinois

'This penetrating book comes from a different world. Its wisdom, purity and passion contrast with the spiritual junk food on which we have subsisted. It is uncannily apt for the destitute church of our time as it reveals a depth of faith capable of producing a Wilberforce or a Wesley—and it can happen all over again.' —Tal Brooke, President of SCP, author of When the World will be as One

"Among the books in Wesley’s library was The Country Parson’s Advice to his Parishioners.  It had made a deep impression on his mind at Oxford, and the little volume was highly prized and widely distributed by the members of the Holy Club.  Its well-known suggestion as to the formation of “Societies” had been accepted by many earnest men, and a striking example of the wisdom of the suggestion had been furnished by the founding of the “Religious Societies” … The formation of Societies became one of Wesley’s fixed ideas … it was expedient that opportunities should be provided for the more serious parishioners to assemble in private and informal meetings in which they might pray, sing, search the Scriptures, and help each other by religious conversation. He lost no time in forming such a Society … in April, 1736.’ —John Simon, from John Wesley and the Religious Societies